I’ve been very remiss about keeping this webpage up to date. For those of you who take an interest in my work, apologies. It isn’t because I’ve given up on writing, it’s because I’ve been so busy writing (for several of the past few months anyway) that I haven’t kept my writer’s page up to date. However, I now have some proper news to impart. I was asked to write a stand alone novel in my series, and when I eventually got it finished the publishers accepted it. I’m pleased to announce that my new novel ‘Hunted by Demons’ is coming out at the end of this month (October 2019). It’s being published by Telos Publishing and is launching at Sci-Fi Weekender at Great Yarmouth on the 31st Oct and 1st and 2nd of Nov. 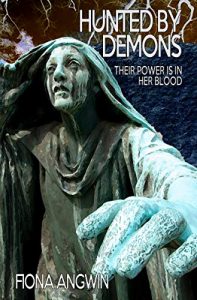 Phoebe and her fiancé, Marco are looking forward to the birth of their first child and their forthcoming wedding when tragedy strikes. During what appears to be a freak accident, Marco is killed.

Phoebe is left alone and devastated but that is the least of her worries.

Something is stalking Phoebe, and it won’t stop until it has every drop of her blood.

A gripping tale of demons, angels and imps.

Although it is a stand alone and you don’t have to have read any of my other books for this one to make sense there is one connection to my other books in the series – Soul-lights and Soul-scars – but for now I’ll let you work that out for yourselves. There is also one strange smaller character (one of my favourites) that some of you may recognise. I’m so excited to have a publisher again, and look forward to working with Telos Publishing. I also hope that you really enjoy my new novel!

She also builds puppets for her own work, and for other people. For examples of these visit Touchstone Puppets